Two bona-fide legends of the UK folk scene headline our ever-popular Christmas concert, which will also be streamed online in partnership with LIVE TO YOUR LIVING ROOM. 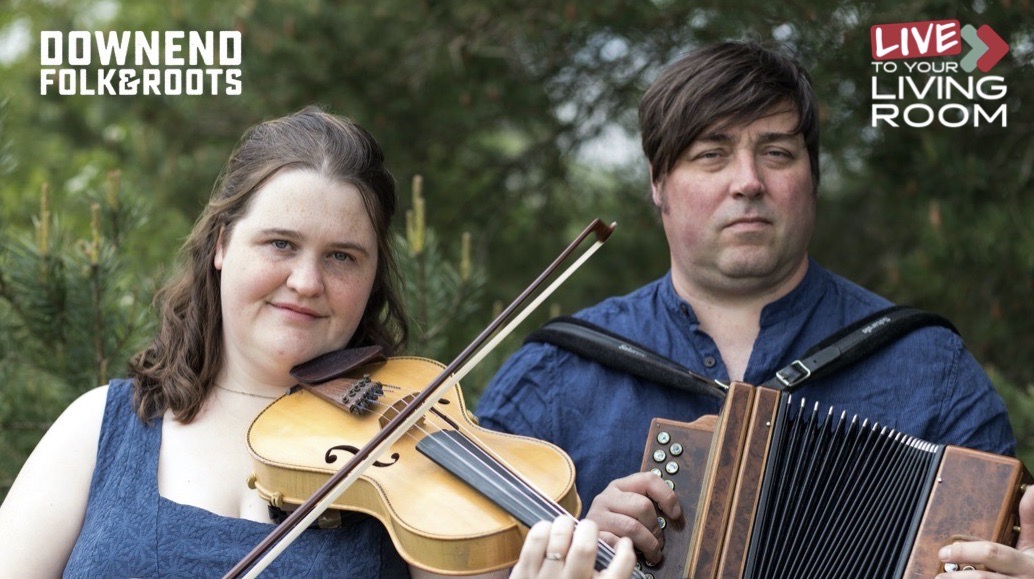 The gathered music-lovers can look forward to a fresh, uplifting and poignant evening. The concert will include music from the duo’s first album Needle Pin, Needle Pin, released in early 2020 as well as a selection of Christmas songs, with the duo visiting old and new carols from the folk tradition.

Although followers of British folk music will be familiar with Jackie and John from their other high calibre bands, this collaboration began quite innocently and spontaneously when the pair first started playing together for fun during guest spots at Nettlebed Folk Club in Henley-on-Thames. Recognising the potential, they began working together on material from their native county of Oxfordshire.

Joining Jackie & John on the bill will be locally-based traditional folk duo COOPER &TOLLER, who will get the music underway with a 25-minute set at 7.45pm.

Vicky Cooper & Richard Toller sing solo and in harmony, sometimes unaccompanied and sometimes accompanied on a range of instruments including fiddle, mandolin, guitar and banjo. With a repertoire ranging from murder ballads to bawdy drinking songs, their material may be hundreds of years old but their approach is energetic, sophisticated and timeless. 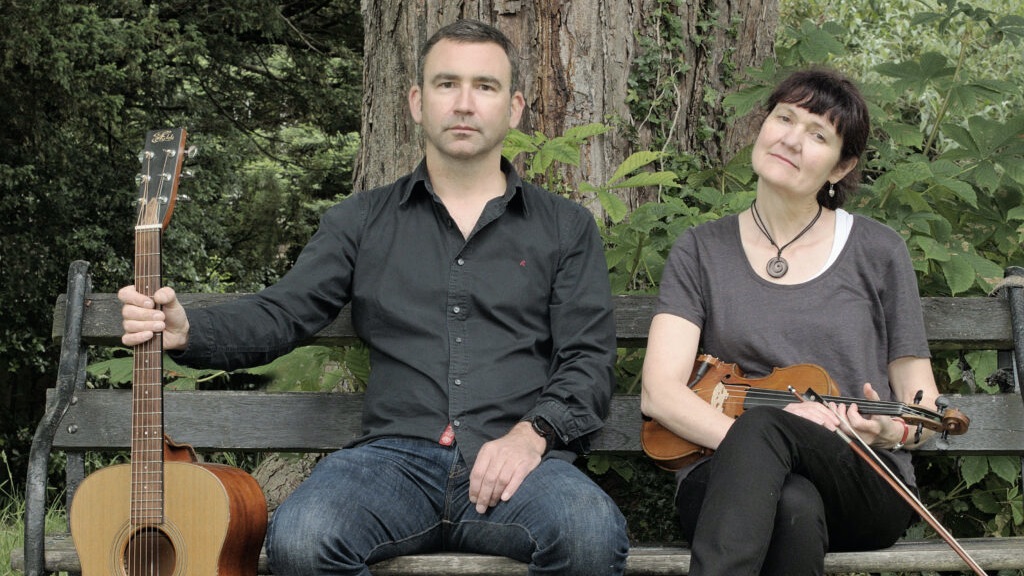 Tickets for the event, which takes place at CHRIST CHURCH DOWNEND on Friday 16 December 2022, are available HERE and from MELANIE'S KITCHEN in Downend (cash only). They are priced at £14 each in advance or £16 on the door. Doors open at 7.30pm and the music starts around 7.45pm. Tickets for the online stream are available HERE, with a range of prices available. All tickets for the original Christmas concert, which was due to be headlined by Belshazzar’s Feast before the untimely death of Paul Sartin, remain valid for the concert.

In the venue, there will be a bar, stocking cider, soft drinks, wine, hot drinks and locally-brewed real ale from locally-based HOP UNION BREWERY. Audience members are encouraged to bring their own glass/mug/tankard, as well as reusable bottles for water, as part of the drive to be more environmentally aware. There is a 50p discount for those that do. There will also be sweet treats available at the bar courtesy of the Radstock-based GREAT CAKE COMPANY, as well as a prize draw, which helps to fund the support artists for each concert. Refreshments for the online version are down to you!

For further information, please email This email address is being protected from spambots. You need JavaScript enabled to view it..

REVIEW: "MESMERISED FROM THE FIRST NOTE"

There’s been a growing sense of excitement about JANICE BURNS & JON DORAN over the last couple of years. Since they met while studying on the folk music degree at Newcastle University, their names have been on the lips of those “in the know”. Since they released their self-titled EP during lockdown, more and more people have been whispering about them. Tonight, the music-lovers of Downend gathered to find out what all the excitement was about.

Janice & Jon lived up to the hype, and then some. Continuing a long tour in support of their debut album No More the Green Hills, the pair delivered a performance that confirmed what everyone has been whispering… that this is a top-quality young duo destined for great things.

Just down the road in Bath tonight, folk giants Bellowhead had people jumping around and shaking the rafters. This was a different sort of evening altogether, though, as Janice & Jon’s close harmonies and intricate instrumental arrangements filled the beautiful surroundings of Christ Church Downend and had the audience mesmerised from the very first notes of their opening song, The Black Fox.

Englishman Jon Doran, originally from not too far from here in the Cotswolds but now based in the North East, is as talented as he is tall. A fine bouzouki and guitar player, Jon also possesses a rich, deep voice that oozes quality. Janice Burns, from Glasgow but also based in Newcastle, is the perfect foil. She plays the mandolin, the instrument for which she is primarily known, with such a delicacy that you could almost cry, and turns out to be a rather good tenor guitar player too. As a singer, her voice is as close to perfection as you’ll hear, whether singing melody, harmony or in Scots, as on The Song of the Fishgutters.

Two brilliant musicians, but it’s when they come together that the magic happens. There’s no need for an 11-strong juggernaut here; two is more than enough. Their voices intertwine and swirl around the church, and the two seem to have an almost telepathic sense of what is required instrumentally. They fill the gaps that the other leaves with such a precision that it must have taken hours of planning and practising, but you’d never know, such is the natural delivery.

There’s no better example of this than on As I Roved Out, a massive highlight in an evening packed with highlights, while the latest single, The Corncrake, also stands out.

Opening the evening was Bristol-based singer/songwriter Dan Weltman. Perhaps best known locally from his indie-rock band Snails, or as one third of old-time string band The Ninetree Stumblers, Dan has recently released his first solo album Rivers In My Mind, and he takes the audience on a whistle-stop tour of his material, which is surprisingly sensitive, almost introspective and beautifully delivered. Another name to watch.

But it’s Janice & Jon’s evening, and the audience rightly demand an encore, the duo choosing Up and Awa’ for their final number. And there can be absolutely no doubting that that’s the direction their career is heading. More please.

One of the UK folk scene’s most exciting young duos will be the headline guests as the highly successful Downend Folk & Roots continues its Autumn/Winter concert series.

JANICE BURNS & JON DORAN are an Anglo-Scottish duo who came together after discovering a shared love of traditional music. They find their songs in archives that span the depths of our history – songs that tell vivid stories about the nature of life and our place in the world. 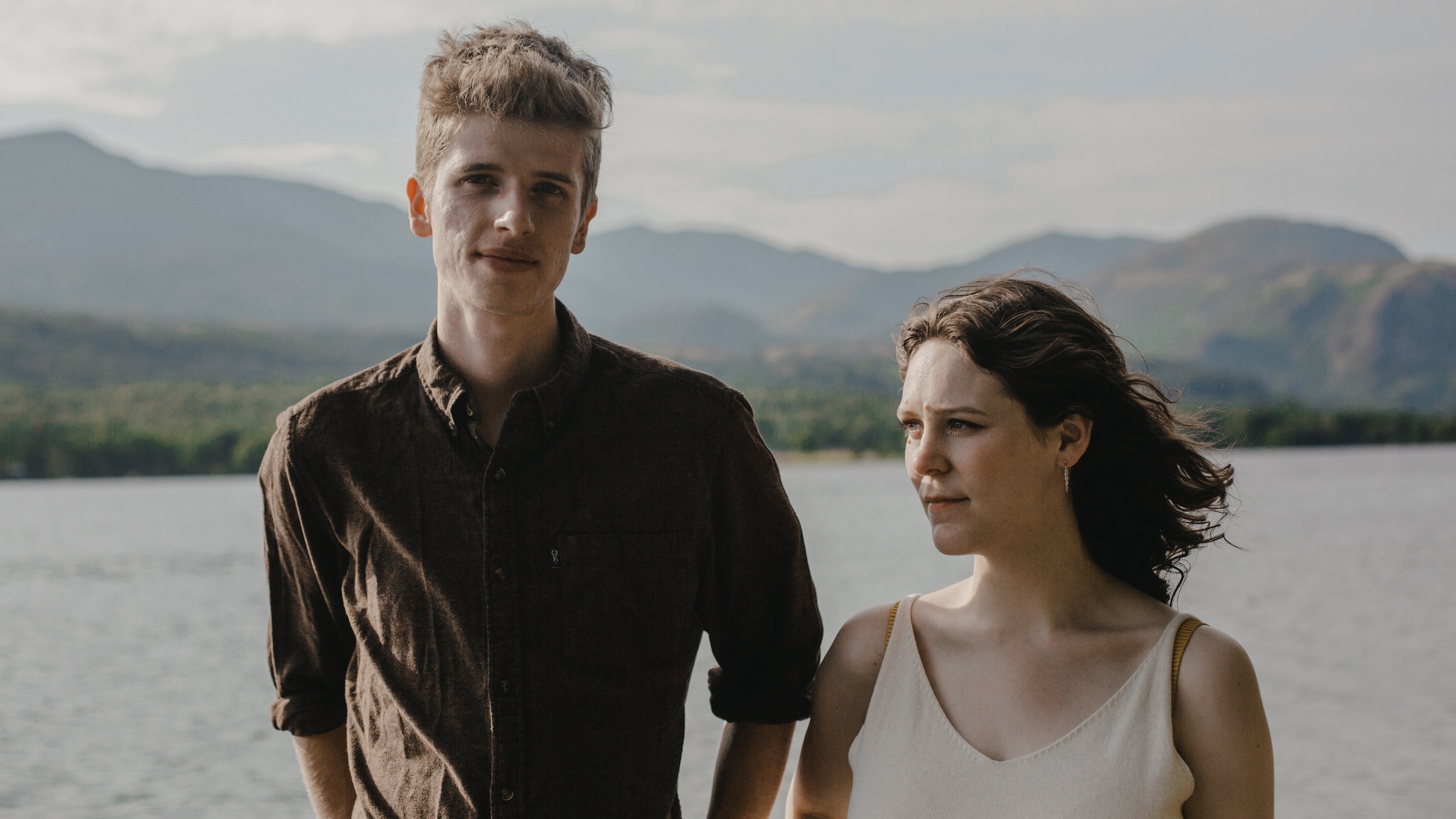 Janice & Jon’s compelling storytelling comes alive through tight vocal harmonies and sensitive interplay between mandolin, bouzouki and guitar. Their arrangements have a spellbinding presence and an understated energy that transports their songs from the pages of books and manuscripts into the imagination of the listener.

The duo met whilst studying folk and traditional music at Newcastle University, including a year spent at the University of South-East Norway together. Since then, they’ve gone from strength to strength, with recent performances at the likes of Sage Gateshead, Manchester Folk Festival and Edinburgh Tradfest. Their self-titled EP was released in 2020 to overwhelmingly positive feedback, including airplay on BBC Radio 2.

Folk songs have always travelled, put down new roots, borrowed and evolved. Janice & Jon’s upcoming album No More the Green Hills, set for release this month, brings together songs that have survived through the ages, shapeshifting and adapting to changing environments as they’ve been passed from singer to singer. Exploring man’s relationship with nature, love and loss, these are songs with an enduring resonance for audiences everywhere.

Joining Janice & Jon on the bill will be Bristol songwriter DAN WELTMAN, whose new solo album Rivers In My Mind is a stark but affirming meditation on love and loss, displaying a flair for beautifully poised, folk-influenced songcraft. The singer with Bristol band Snails, as well as one third of old-time stringband The Ninetree Stumblers, his solo material branches away from Snails' quicksilver psych-pop into darker emotional terrain while retaining the same gift for a melody that seeds and blooms in the listener's memory.

Produced by Lukas Drinkwater, Dan filters American influences (1960's Greenwich Village via 1970's widescreen country) through the same gently surreal English lens once peered into by Ray Davies, Bill Fay and Nick Drake among others. Dan will get the music underway with a 25-minute set at 7.45pm.

Tickets for the event, which takes place at Christ Church Downend on Friday 18 November 2022, are available online HERE and from MELANIE'S KITCHEN in Downend (cash only). They are priced at £14 each in advance or £16 on the door. Doors open at 7.30pm and the music starts around 7.45pm.

There will be a bar, stocking cider, soft drinks, wine, hot drinks and locally-brewed real ale from locally-based HOP UNION BREWERY. Audience members are encouraged to bring their own glass/mug/tankard, as well as reusable bottles for water, as part of the drive to be more environmentally aware. There is a 50p discount for those that do. There will also be sweet treats available at the bar courtesy of the Radstock-based GREAT CAKE COMPANY, as well as a prize draw, which helps to fund the support artists for each concert.